The BEST Wedding Shower I’ve ever been to!

And I’m not just saying that because I helped organise it. My sister’s shower this past Sunday was so fun! And I usually hate showers.

Her new married name will be Lancastle so we decided to go with a royal theme.

Decorations: the whole room was Red and Black from the chairs to tables, balloons, streamers; pictures of Prince William and Kate with my sister and her fiance’s faces photoshopped in; and a large castle complete with miniature king and queen. 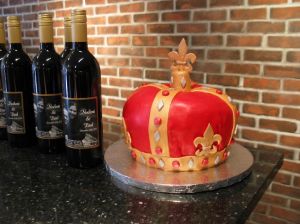 Games: Random name tags with ‘royal court’ names (eg. Princess Camel toe, Lady Got Back). Mingle game – each name tag had a different question about the bride and groom. Guest had to find out the answer by mingling and asking people (eg. What’s Noelene’s secret talent).

Gift Opening Game – this was the best part. Each guest was asked ahead to prepare a 30 sec piece to ‘entertain the queen’. We got a great mix of stuff from comedy to sentimental including a dance party, an ‘old school’ rap, a strip tease, poems, a massage, cake, and a reenactment of the wedding night.

This entry was posted on August 29, 2011 by sandtoesha in Having Fun and tagged Royal theme, wedding shower.