Yes I know, Vancouver has pretty much shed the cliche reputation of being a ‘no fun city’ with the Olympics, great new live music venues and so many street festivals in the summer. Still there have been a few set backs – hockey riots, closing of the Waldorf to name a few. We definitely are fun though… just didn’t realise how much the city has stepped up until this past weekend when I attended the best party! It was dubbed the ‘Hotel Takeover’ Ramp Party or #HotelRampParty. 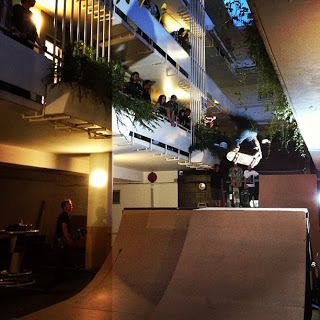 Held At the Burrard hotel, they built an awesome skate ramp on the bottom level with stage, dance floor and Bar where they had live music and DJ’s all night.The second level they converted all the hotel rooms into art installations with some great stuff (and swag from sponsors like Skullcandy) and cool thing was that you could watch the ramp from the second level.

So I showed up with my sling which I was told gave me street cred… there were more than a few of us there in slings and casts. I had to get a trick/story down fast as to how I did it. Too many of the trick names were hard to remember so I went with a backside 180 (instead of the actual I was walking… then I fell). Yes my story was far fetched but one guy told me he broke his wrist saving a baby… so I wasn’t alone in my embellishments 🙂

The other thing I was impressed with, the people. So i know skaters sometimes get a bad reputation but this was a good group of people. Creative and artsy, I was impressed with the style of most outfits instead just a few, and they were so respectful of the venue. Had fun but didn’t destroy the place (as far as I could tell). Even the bathrooms at the end of the night still looked respectable (no smal feat for a party of this size). 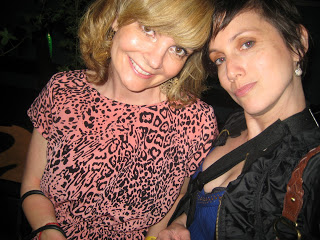 Great job The Burrard, Jamcouver, Arrival (the old Waldorf crew) and everyone that put this shindig together. Looking forward to the next one!

Oh, and thanks to @Isabeldc for the great ramp in action photo 🙂

This entry was posted on June 18, 2013 by sandtoesha in Having Fun and tagged Burrard, Disc jockey, skate, Skullcandy, Vancouver.