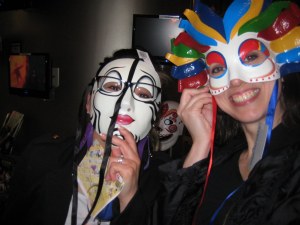 I did the math and this past Vegas trip is #7. That seriously goes against my ‘avoid repeat destination travel because there are too many cool places to see’ rule. But then I guess I’ve broken that rule before with Puerto vallarta (4x) and Brazil (2x) and soon again with my yoga trip to Costa Rica (2x). But does Vegas really count as travel? It’s so close and it’s just a fun place to go mingle when you get sick of the Vancouver nightlife.

So Vegas this time we stayed at the MGM, saw Sugar Ray Leonard hanging out. Checked out KA by CIRQUE DU SOLEIL and it was awesome! Minus the guy at the MGM box office who sold us tickets for the show after it started leading us to believe we’d only miss ten min but was actually more like 30! Also saw the Lion King which was also great, minus Michiyo giving me a hard time because I thought Mufasa was cute… whatever, you can have Simba but Mufasa was the mane man : )

Spent some time by the pool at Michiyo’s insistence. The sun was out but it was cold… I think I got whiter as the sun and cold wind just dried out my skin. That coupled with my cold hands had Michiyo convinced I was a ghost/corpse. I told her she was like the boy in Sixth Sense. If the boy decided to hang out and shop, see shows, party, tan and make fun of his ghosts.

This entry was posted on April 13, 2011 by sandtoesha in Giggle, Having Fun and tagged vegas.